Billy Bain is what some might call a ‘typical millennial artist’. His work is funny, dark, relatable and, of course, highly political. Yet strip his work back, past its humorous vulgarity and seemingly accessible aesthetic, and what we discover is the raw self-referential vulnerability of a young man probing his way through the muddied waters of contemporary Australian culture, ethnicity and gender.

A recent honours graduate from UNSW Art and Design, Bain grew up along Sydney’s Northern Beaches region before moving to Darlinghurst where he now works and lives, creating ceramic sculptures, prints and paintings. It’s hard to believe he has only been practicing ceramics for one year, yet while his ceramic forms are well made structurally it is clear that their surface treatment and caricature-like appearances have been in the works for years through his dedicated painting and drawing practice. Like many artists, Bain draws upon his own life experience in his works, including his conflicting cultural duality; the toxic masculinity witnessed within the Australian Beach and Pub scenes; and the decolonisation of Australian space and place. Yet while many of the concepts he discusses seem resolved in his works, each vessel, painting or print is a progression towards his uncertain cathartic dealing with his own personal conflicts. Beautifully raw and real, Bain’s works seem confident in themselves – their cultural critique in perfect balance with an intentional dark humour, sheathing the work with a playful accessibility while not obfuscating its true intention.

I recently had the pleasure of asking Billy a few questions about his work and practice and in true Billy style his humour and authentic honesty makes for a thought-provoking read, sans artsy bullshit. A highly talented contemporary artist, Billy Bain is quickly becoming one to watch.

A brief discussion with Billy Bain:

RL: How long have you been practicing art?

BB: I started in preschool. It’s taken me a really long time to get half decent at it. I’ve only been “taking it seriously” for a year or two though.

RL: For those unfamiliar with your art practice how would you describe your work and the concepts behind it?

BB: I’m a multidisciplinary artist from Avalon on Sydney’s Northern Beaches, but I now live and work at Darlinghurst in town. I primarily work with painting, printmaking and ceramics. Through making I discuss ideas of Australian Masculinity, particularly within the Australian Beach Space, the pub and within sporting contexts. I try to critique toxic behaviours that are prevalent amongst men in Australia. I explore the conflicting duality between my Indigenous heritage and that of the Euro-centric culture I was raised within. My own disconnect with my traditional Indigenous culture and country is a source of motivation for research that informs my works and constructing my own identity as a suburban Indigenous man. Through accessing archival information, objects and oral histories shared via family, I seek to create my own narrative interpretations of where I came from and my cultural identity. My most recent bodies of work have focussed on the decolonisation of the Australian beach space, particularly through the deconstruction of localism practiced by white male surfers.

RL: You’ve said previously that you use dark humour to critique toxic masculine behaviour, do you think your work and others similar can provoke change or conversation within Australian culture?

BB: I feel like humour is a really good way to deal with serious issues as it keeps things accessible and fun. I want to draw people in by making art that looks fun but has a bit of a sinister backstory. I hope it inspires that feeling like when you watch a video of someone getting hurt in a comical way and you can’t help but laugh but you also know that it’s really wrong. Although most people consider it to be the “Lucky Country” Australia can be a pretty suss place and I want to hold a mirror to that. I think I just really enjoy taking the piss out of things, and in particular myself. A lot of the things I critique in my art are self-referential, and it’s probably a way of cathartically dealing with my own personal conflicts.

RL: As I understand you’ve been printmaking/painting for a while, what attracted you to clay and sculpture as a medium?

BB: Boredom mostly. I was growing a bit stale with print and painting. I started my degree majoring in ceramics but dropped it soon after because the classes were too focussed on functional design ware and not sculpture. I didn’t touch clay for four years after that but picked it up again in 2018 and that’s all I worked with for the entirety of my honours degree. Picking up a new medium for the final year of my degree that I knew little about was tricky and most of my learning came through butchering works. It forced me to learn fast though.

RL: How does the idea of the ‘stereotype’ fit into your work?

BB: I’m not really conscious of dealing with stereotyping in my work while I’m making. I think its innately human to want to categorise things so we can understand them. If people are stereotyping the characters in my work then it's their own perception of society that they are understanding through what I’m making. I just put the stuff out there for people to take as they will. I feel like when you’re dealing with ideas that are quite divisive it can be interpreted in different ways which I love. One person might be celebrating the drunken patriotism in the work because that’s something they identify with and love, whilst someone else will understand that it’s a critique and experience it in a completely different way.

RL: Many of your works (e.g. Welcome and A Millennial Retirement) are very politically charged and have a satirically pessimistic view of Australian politics and culture. What is it you are trying to achieve with such heavily loaded works?

BB: I just want to create conversation. I don’t feel like art is this great tool that can magically change the world, but I do think it’s a place for a lot of people to have a voice they wouldn’t otherwise be able to exercise. I’m not a hugely vocal person, so when it comes to my political views art is an avenue I can express the way I feel and be comfortable doing so.

RL: Are there any artists you admire or that readers should know about?

BB: I’ve been working with Ramesh Nithiyendran a bit over the past year assisting in the studio. He’s been a massive help with learning to hand build ceramic works. Jason Phu also has been a big inspiration. The way he transcends between sculptural and image-based practices is really cool. My friend Matt Crowe also hand sews some really good quilts.

RL: What can we expect from future works? Have you been working on anything new? BB: I’m working on a series of ceramic sculptures of iconic Indigenous Australian athletes right now. Probably going to focus on those for the next month or so then get stuck into some new paintings to enter in the Brett Whitely Travelling Art Scholarship later this year. 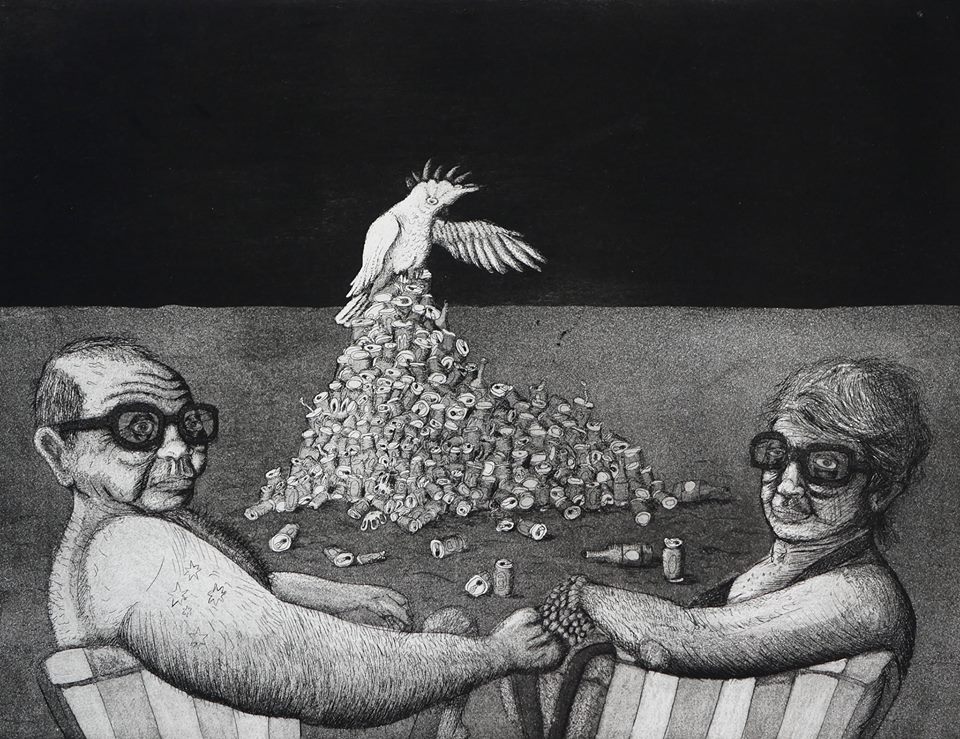 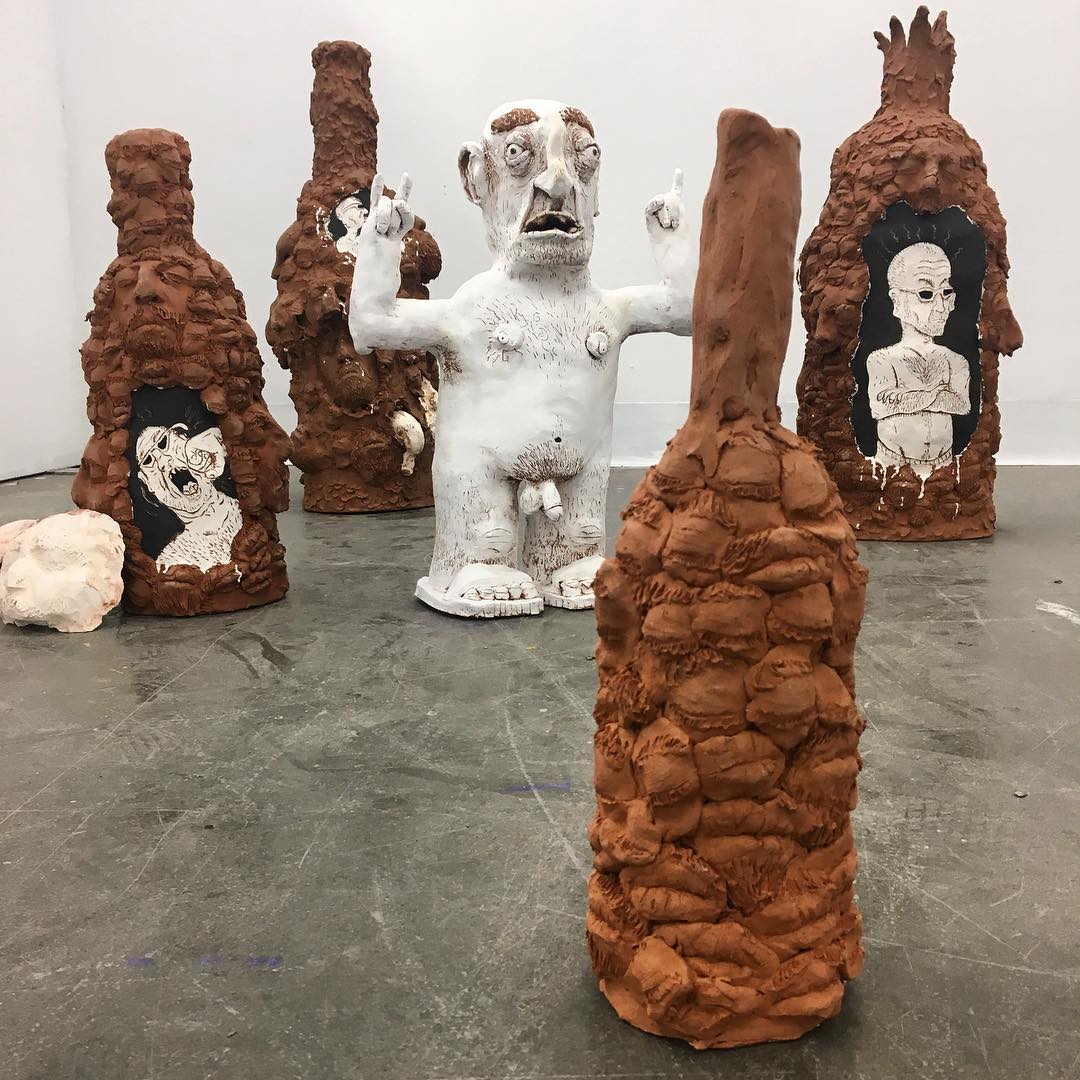 FROM CANVAS TO CLAY: Exploring material limits with Hugh Black